Clubs, Players Take to Twitter to React to the Indonesian Soccer Match Stampede That Killed At Least 174 People


A stampede that occured in a stadium in Indonesia after a soccer match has killed at least 174 people and the number is expected to rise. The deadly tragedy took place after the home team, Arema FC, lost to Persebaya.

Arena FC had not lost a home game in 23 years.

Numerous soccer teams around the world as well as individual players have taken to Twitter to express their thoughts and condolences regarding the Indonesian stampede, which is now considered as one of the deadliest sports disasters in history. 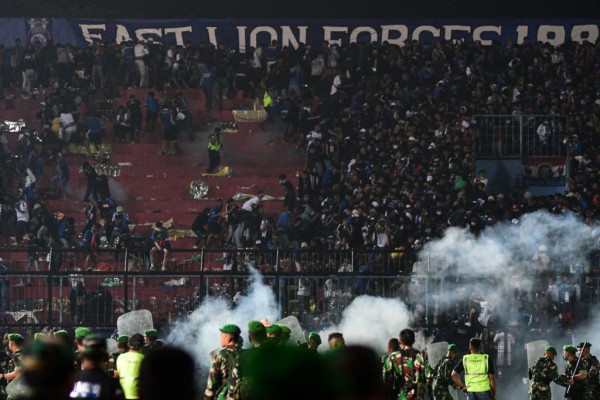 A stampede that occured in Kanjuruhan Stadium in Malang, Indonesia has killed at least 174 people and injured at least 180 more.

The home team, Arema FC, lost to Persebaya 3-2. Things began to go wrong when the crowd, particularly the fans of Arena FC, began throwing bottles and other objects at the players as well as football officials, according to a report by Al Jazeera.

“Fans flooded the Kanjuruhan Stadium pitch in protest and demanded that Arema management explain why, after 23 years of undefeated home games, this match ended in a loss,” the report states.

Things escalated when riots spread outside the stadium. In an effort to control the crowd, local police used tear gas on the rioters. The tear gas reached the crowd in the stadium, which caused people to panic.

A report by BBC notes that FIFA, the international governing body for soccer, does not allow the use of tear gas or any other “crowd control gas.”

The news of the stampede at the Kanjuruhan Stadium has spread all over the world. It has even reached the different soccer clubs, who have taken to Twitter to share their reaction to the tragedy.

Premier League club Chelsea FC said in a tweet that the club is “deeply saddened by the events at the Kanjuruhan Stadium in Indonesia.” You can view the tweet below:

All of us at Chelsea Football Club are deeply saddened by the events at the Kanjuruhan Stadium in Indonesia.

Our thoughts are with everyone affected by this tragedy.

The sentiment was echoed by fellow Premier League club Liverpool, who said in a tweet that “the thoughts of everyone at Liverpool Football Club are with all those affected at this time.”

German soccer club Bayern Munich and Spanish club Barcelona have also tweeted their condolences and prayers for the victims.

FC Barcelona is pained by the tragic events at Kanjuruhan Stadium in Indonesia and rejects all acts of violence both on and off the field.

Our heartfelt condolences go out to the families and friends of the victims.

FC Bayern is deeply saddened by the tragedy at the Kanjuruhan Stadium in Indonesia and rejects all acts of violence.

Our heartfelt thoughts are with all those affected.

Soccer players have also expressed their thoughts on the tragedy via their respective Twitter accounts. Sergio Ramos, who is currently playing for French club Paris Saint-German, calls the tragedy “heartbreaking” in a tweet, adding that thoughts and prayers are with those affected by the tragedy.

Devastating to hear of the events at the Kanjuruhan Stadium in Indonesia last night. Shocking news. Thoughts are with all family and friends and everyone affected. 🙏🏼

Don’t go wrong way. R.I.P. for all victims and their families. #indonesia pic.twitter.com/sgDFnfqWOV