Top Posts
5 Questions with Chef Ashley Rath of Saint...
حقيبتك الفاخرة المثالية – Inside The Closet
Modern Age Flagship in NYC by Ringo Studio
Mandeville Canyon by Walker Workshop
What To Do About Your Aging Neck
A Polychromatic Apartment in Rome by STUDIOTAMAT
6 Ways Carpets can change the look of...
2023 Lexus RX – Exclusive First Look
The Best Overwater Villas and Bungalows Around the...
Part two, cut and make – Permanent Style
Fashion 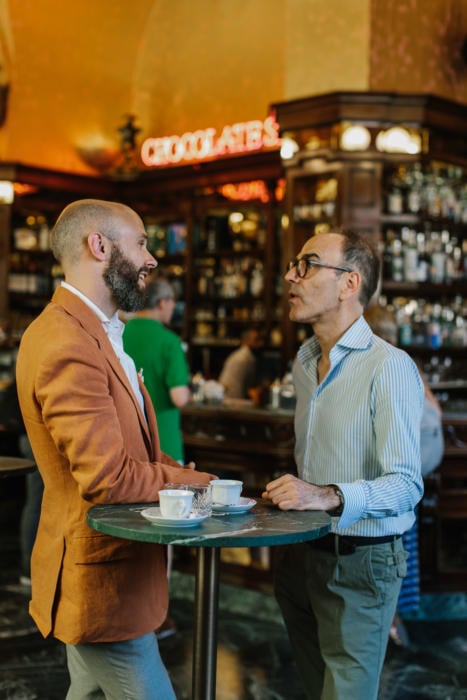 “It was really eerie, Simon, with all the tourists gone.”

“I know that was the same everywhere,” says Simone Abbarchi (above), “but seeing the Piazza della Signoria empty made it feel like we’d gone back in time. Like the Medici could just step out of the Palazzo [Vecchio].”

Simone is telling me what it was like in Florence during the pandemic, over coffee in the café Rivoire.

“I came into work almost every day, into the shop,” he says. “Or had to go to our workshop, just near to the Fortezza [da Basso, where Pitti is held]. It was strangely silent – not even a bird, somehow.”

Florence is probably the city I know best after London, having visited so many times over the years, and having good friends there now. It was nice to talk to them about what those times had been like. But also a little sad. 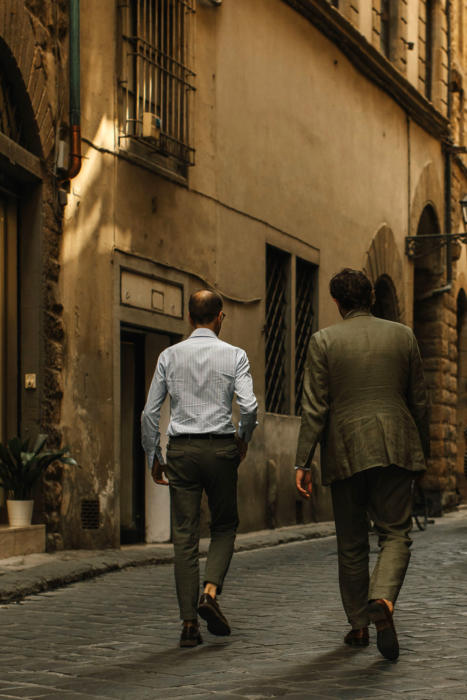 Shirtmaker Simone Abbarchi had to move shop, because the landlord refused to lower the rent despite Simone not being able to open – or more importantly to travel, given most of his business comes from London and New York.

So did shoemaker Roberto Ugolini, on the south side of the river. Both vacated shops they’d had for years, and moved to premises nearby.

That was a familiar story in many parts of the world. “The landlords just don’t care – the empty city scared them, given so much of their money comes from tourism, but local makers leaving do not,” he says.

Fortunately, Roberto doesn’t need to be in a prominent location. He was already a little off the beaten track, next to the student nexus of Santo Spirito, but even there he would get daily inquiries by people who had no idea what bespoke shoemaking was.

“Honestly Simon, I wasted so much time explaining to people what went into bespoke shoes and why they cost that much,” he says. “They’d often say they’d come back to the next day, but they rarely did. It’s too alien a concept – the work and the time involved.” 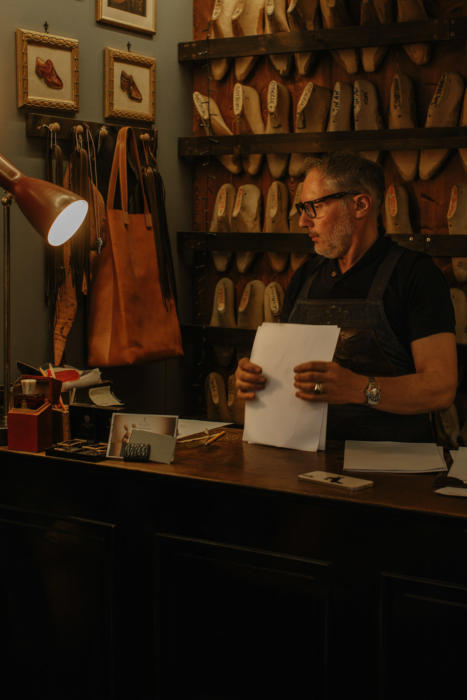 So Roberto moved into a shop round the corner, which is on a quieter street and gets less passing traffic. Simone, however, felt he needed the footfall.

“It makes a difference to people if you have a shop on a good street, they think of the shirts differently,” Simone says. “Also, it’s not too much to spend if someone wants a shirt made while they’re on holiday.”

Simone’s shirts start at €165 for made to measure, with bespoke from €230. With a lot of luxury ready-made shirts around that price he’s always been great value (and in my experience, very reliable too).

So he moved to a smaller shop on Via delle Terme, 15R (for those readers that asked recently, having visited Florence, whether he had closed).

It’s still pretty new, with little on the walls, but actually it could end up being a nicer space than the old shop, which was always quite dark. 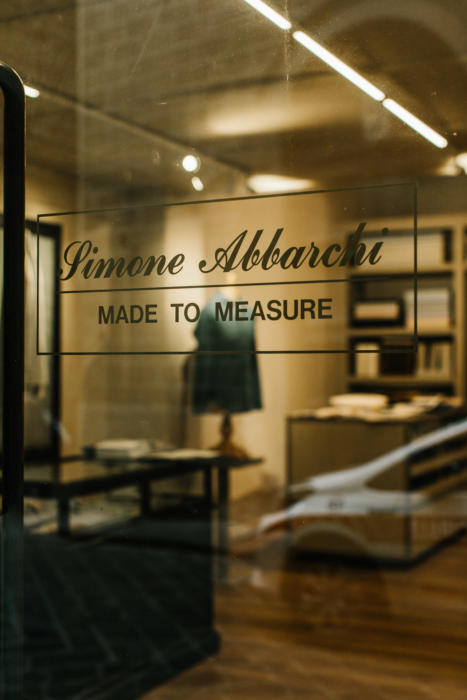 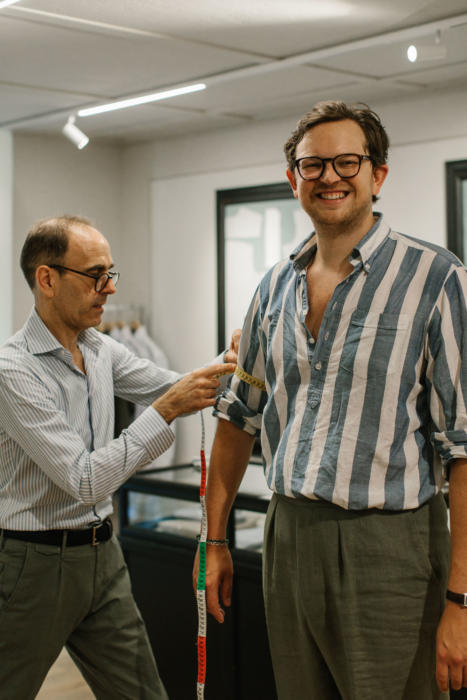 The fitting area is next to the big glass frontage, which brings in a some natural light (that’s Lucas above, by the way, who runs the PS Shop, being measured up).

There’s a nice sitting area round the corner for browsing through a wall of cloth books. Helpfully, the area for packing shirts and for storage is also on a mezzanine above the ground floor, reached via a nice iron staircase.

And there’s a big table in the middle of the shop, where all the various options for cloth and colour can be laid out. In the picture below – taken from that mezzanine – Lucas is selecting an awning-stripe linen for a camp-collar shirt similar to the one featured in our Summer Top 10. 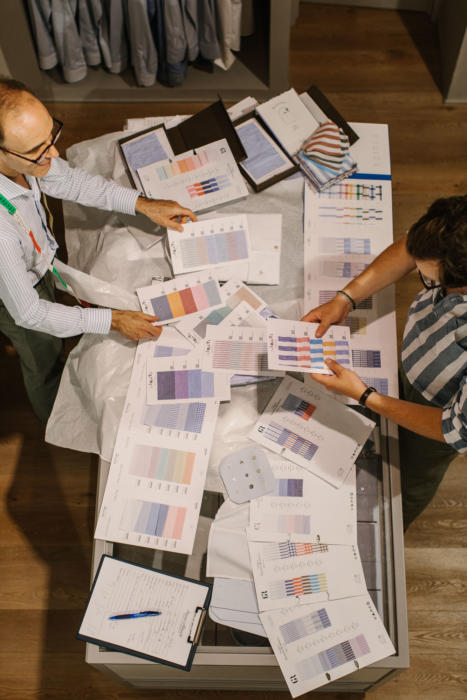 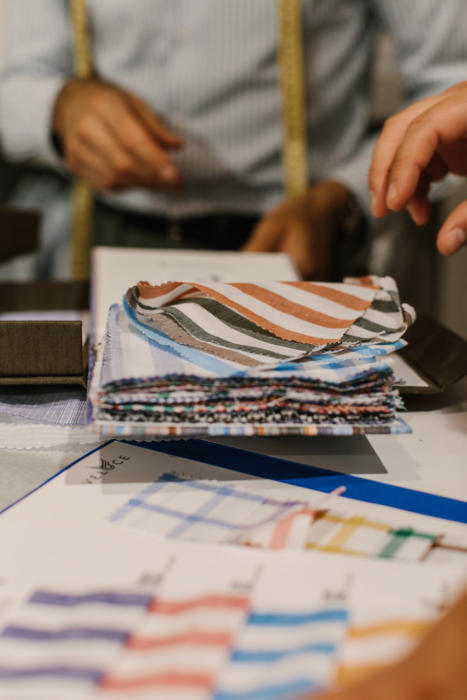 The shirt I went with in a similar style is pictured below. I think it’s fair to say Lucas has bolder tastes than me.

I wouldn’t say Simone puts a lot into design work – he’s not a brand – but he has made a huge variety of shirts over the years, and will often have made something similar to any idea.

When I asked about more casual summer shirts, which could be worn untucked or tucked, he suggested this camp-collar design and the one-piece collar that Italians often call a Loro Piana or transformable collar. It’s difference from a normal one-piece is that the collar can still be buttoned, and so worn with a tie.

The shirt also has a squared off hem, which makes it easier to weat untucked. This means there is a little compromise when it’s tucked in, as it won’t stay tucked as functionally as a regular length. But for an easy summer shirt, that’s fine. (It’s also easier if you wear really high-rise trousers.) 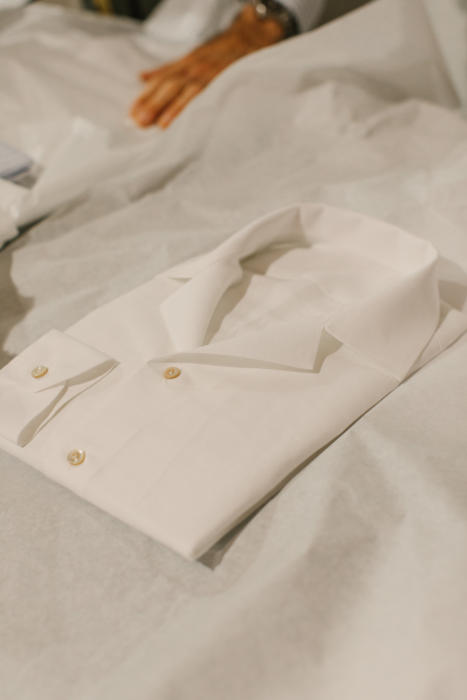 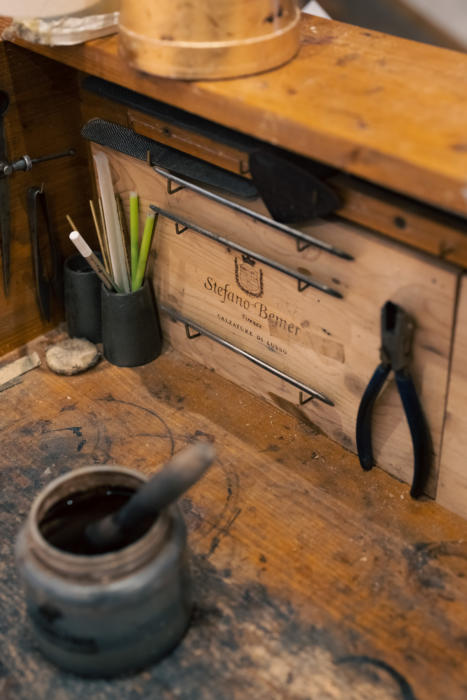 Other shops in Florence have closed too. Sartoria Vestrucci, for example, closed its little shop and relocated to be part of Stefano Bemer.

This makes sense – the two were both owned by Tommaso Melani, and the beautiful converted church that Bemer uses is a natural home for tailoring. It feels like a home for crafts and craftspeople.

Vestrucci is also restricting its bespoke business to those that visit Florence, and will concentrate on made to measure. I really hope that model works – the Vestrucci combination of sharp cut and lightness is unique, and I love my flannel suit (which I had altered when I visited).

In fact that goes for all these wonderful people and the clothes they make. These are not easy times to operate a bespoke business, and Pitti Uomo – which brought so much attention to the city – still has an uncertain future.

It was lovely to see everyone again, and I fervently wish them the best for the years to come. 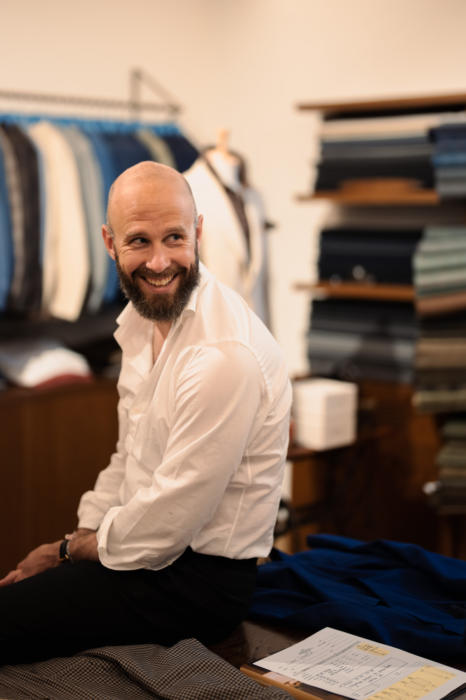 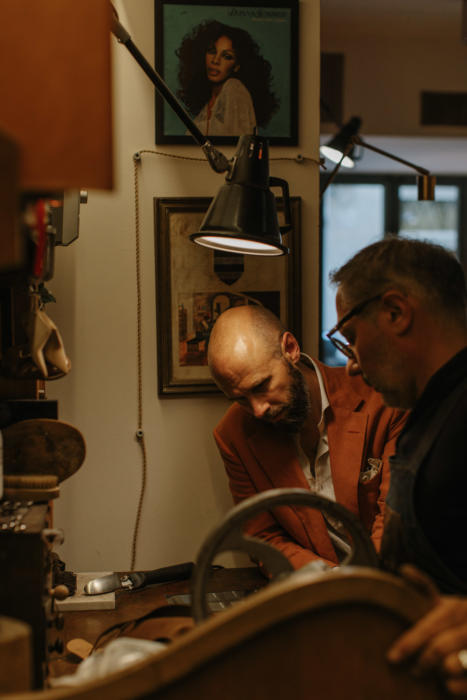 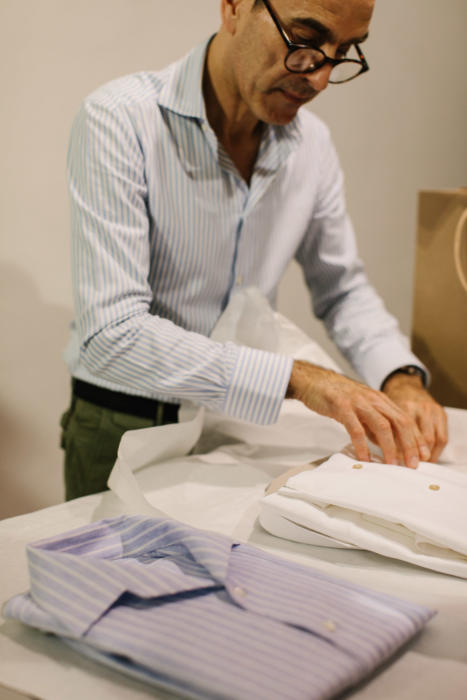 9 Of The Best Derma Rollers For Beard...

The Depp/Heard Trial’ Is A Fictional Film On...

Pursuitist Chats With Essex County Straight Off the...

23 Of The Best Minimalist Wallets That Will...