A Polychromatic Apartment in Rome by STUDIOTAMAT 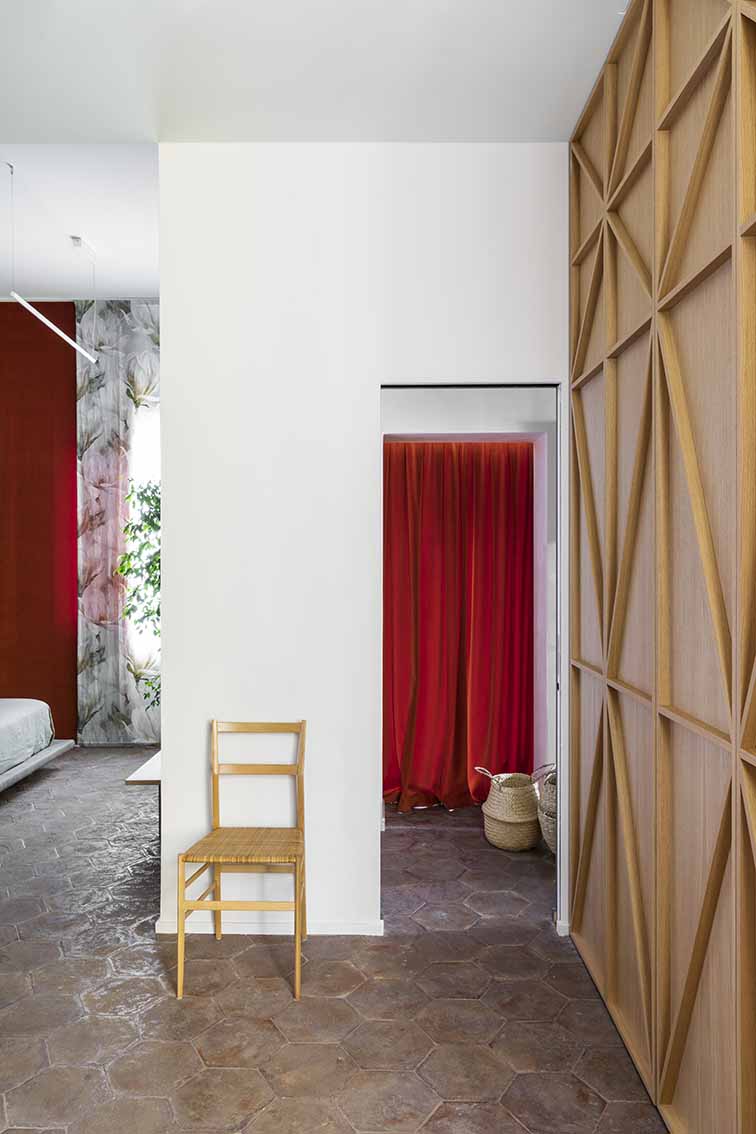 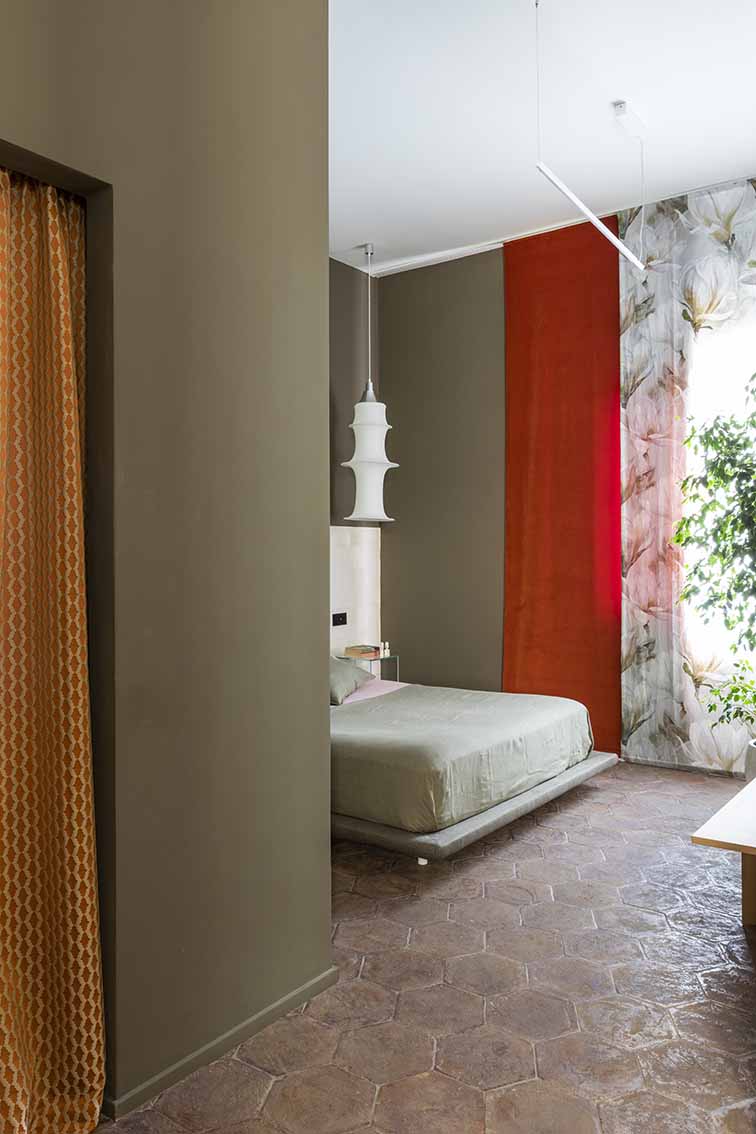 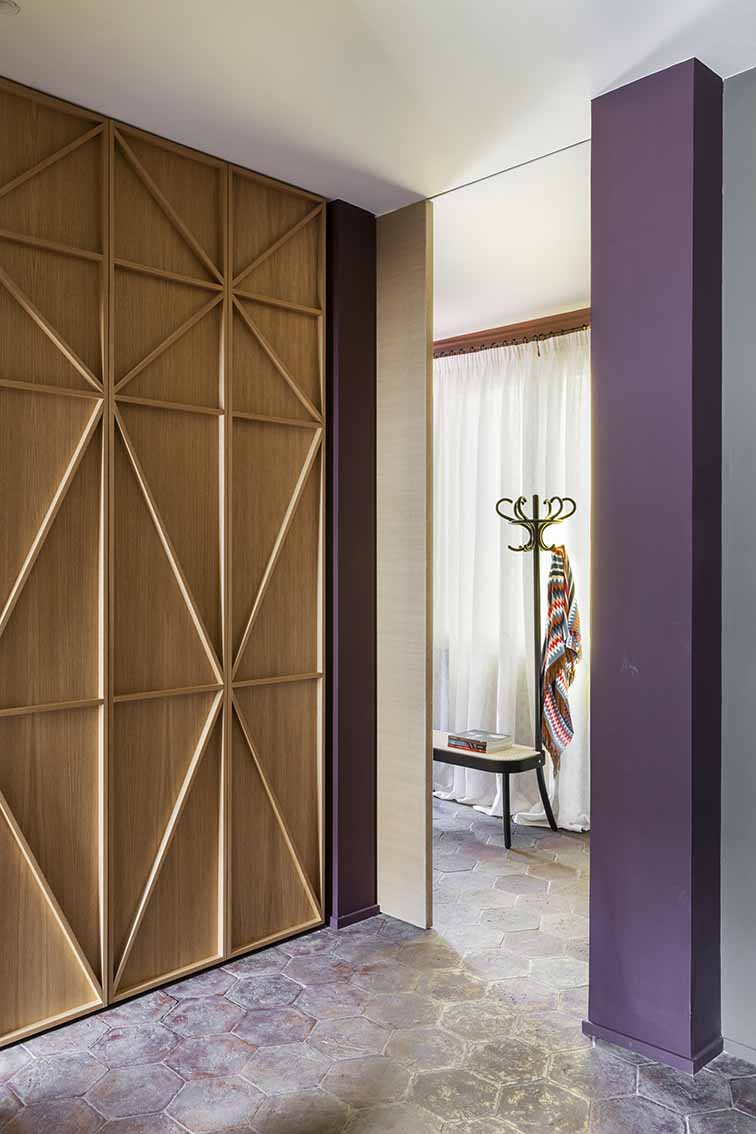 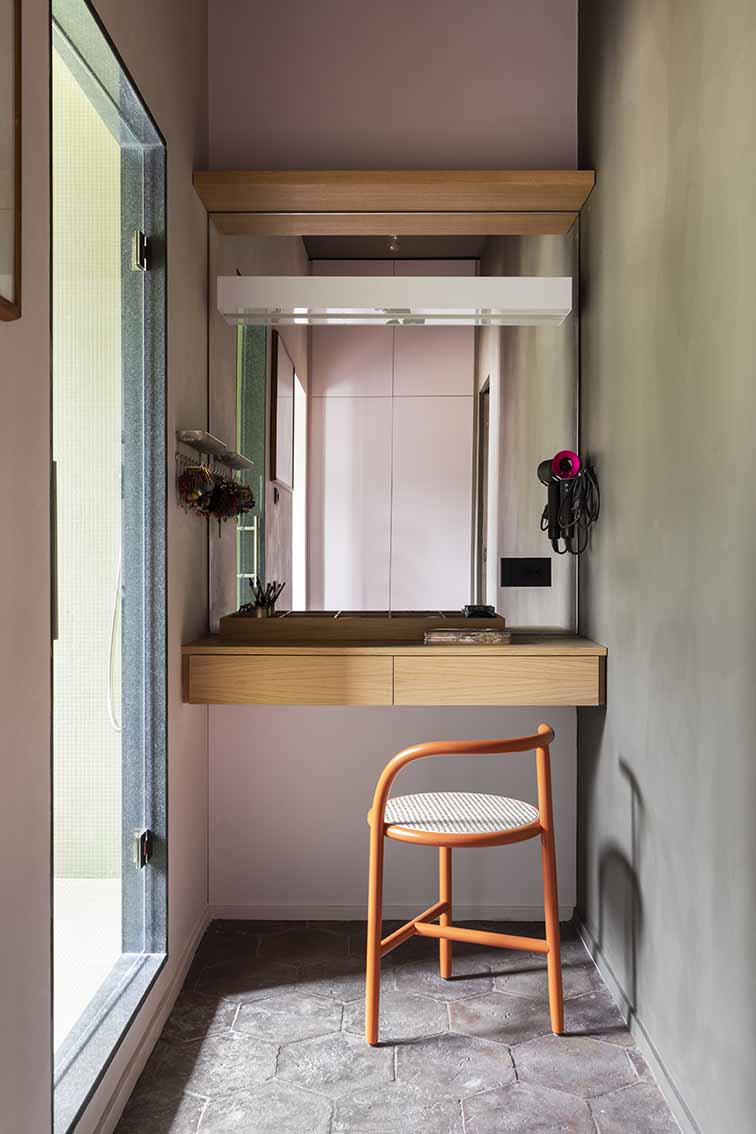 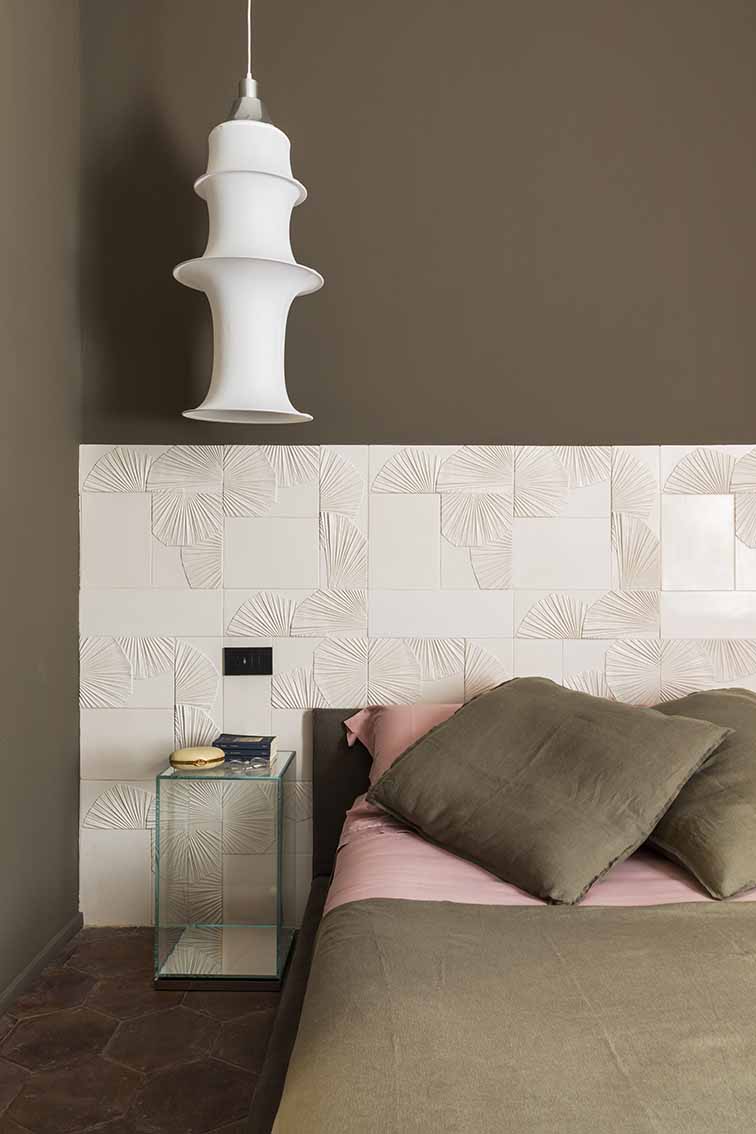 In the Parioli district of Rome, on the top floor of a 1930s building, sits an apartment that looks positively Photoshopped. With each room a different colour, it is aptly christened Cromatica (the Italian word for ‘Chromatic’). But it wasn’t always this way. When STUDIOTAMAT took up the project, it was a lifeless 160-square-metre apartment that needed lots of work. “The owners wanted a house with open and flexible spaces that could serve them in every season. It originally had a split layout, with various small rooms distributed over a long corridor. We demolished everything and started with a clean slate,” say Matteo Soddu, Tommaso Amato and Valentina Paiola, the architects and co-founders of the studio.

The trio breathed new life into the site by way of large, fluid spaces steeped in natural light. The apartment was reshaped like a peninsula, with its length in direct contact with the outdoors. “The distribution scheme leaves ample scope to modulate the degree of privacy and maintain different environments through the use of such things as soft curtains and specially designed sliding panels,” says Matteo. 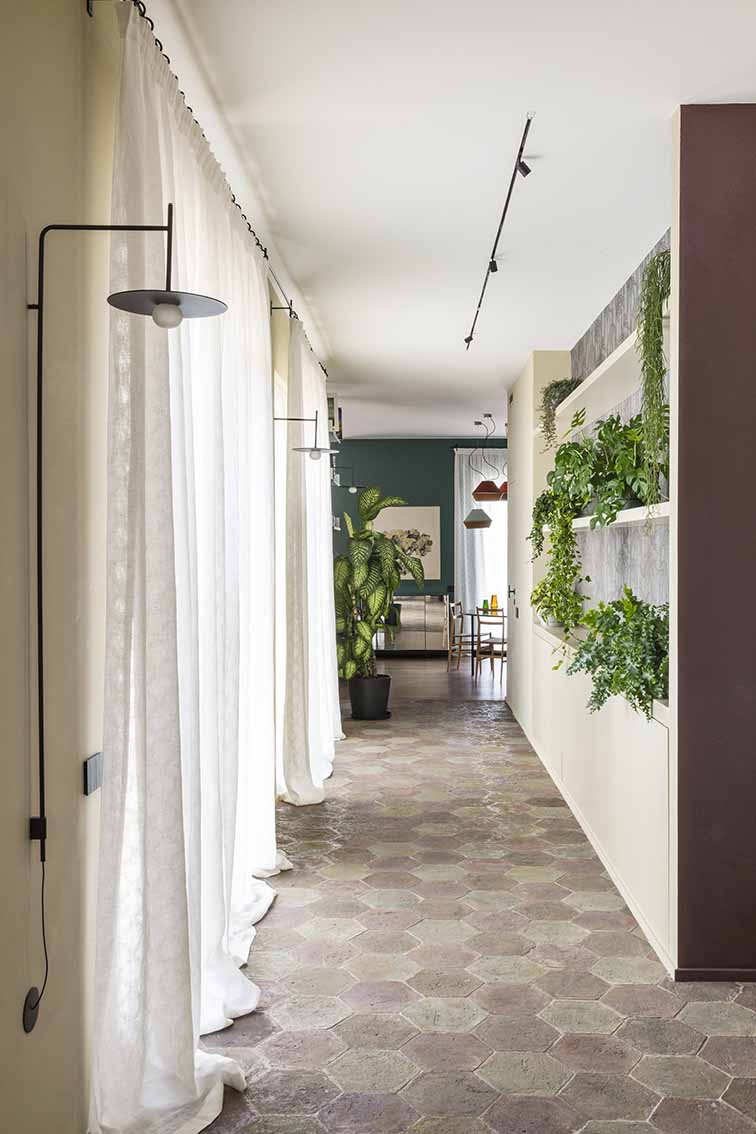 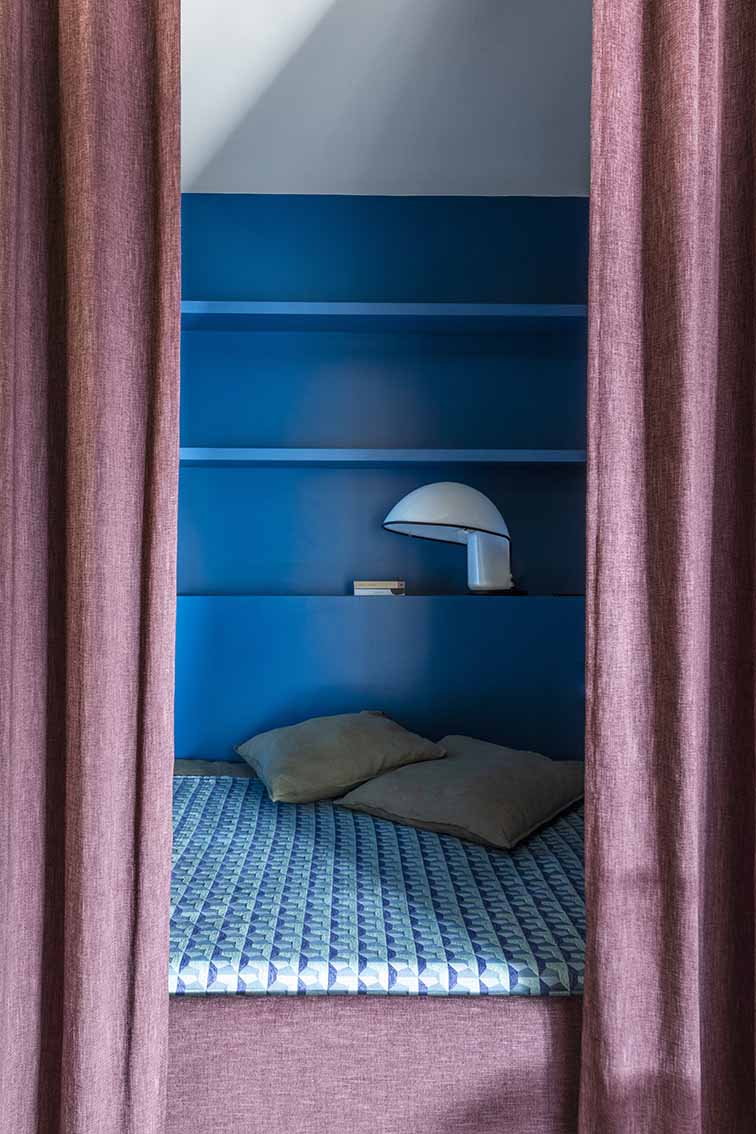 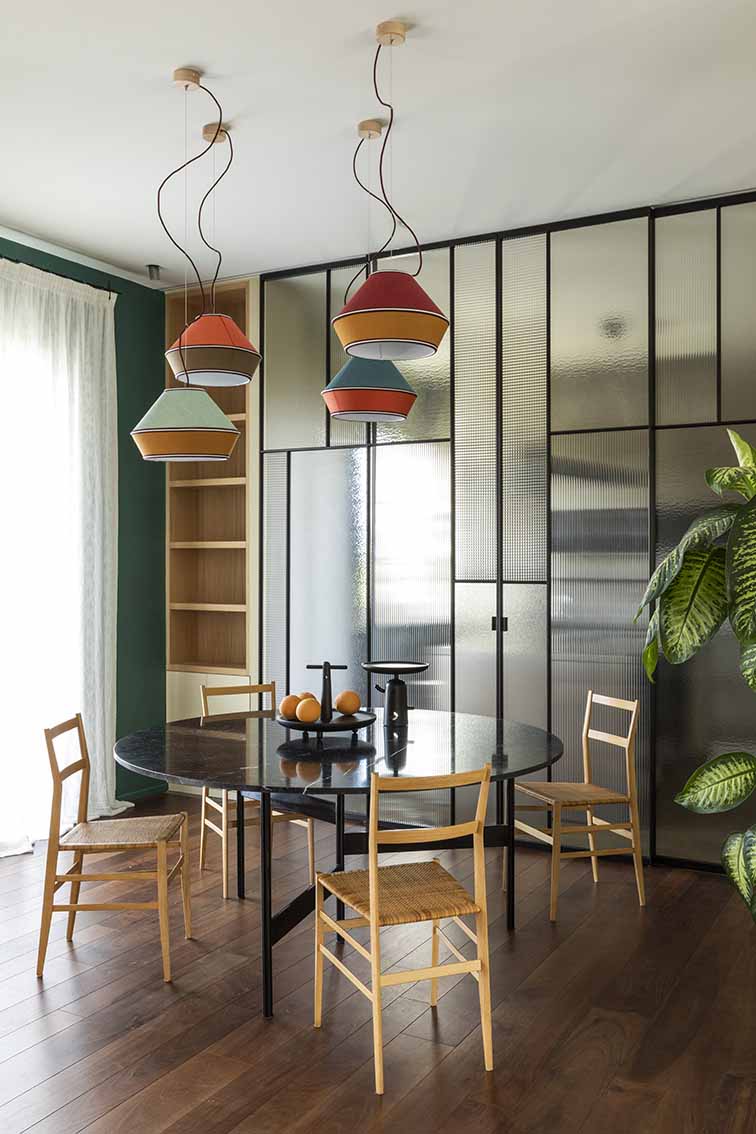 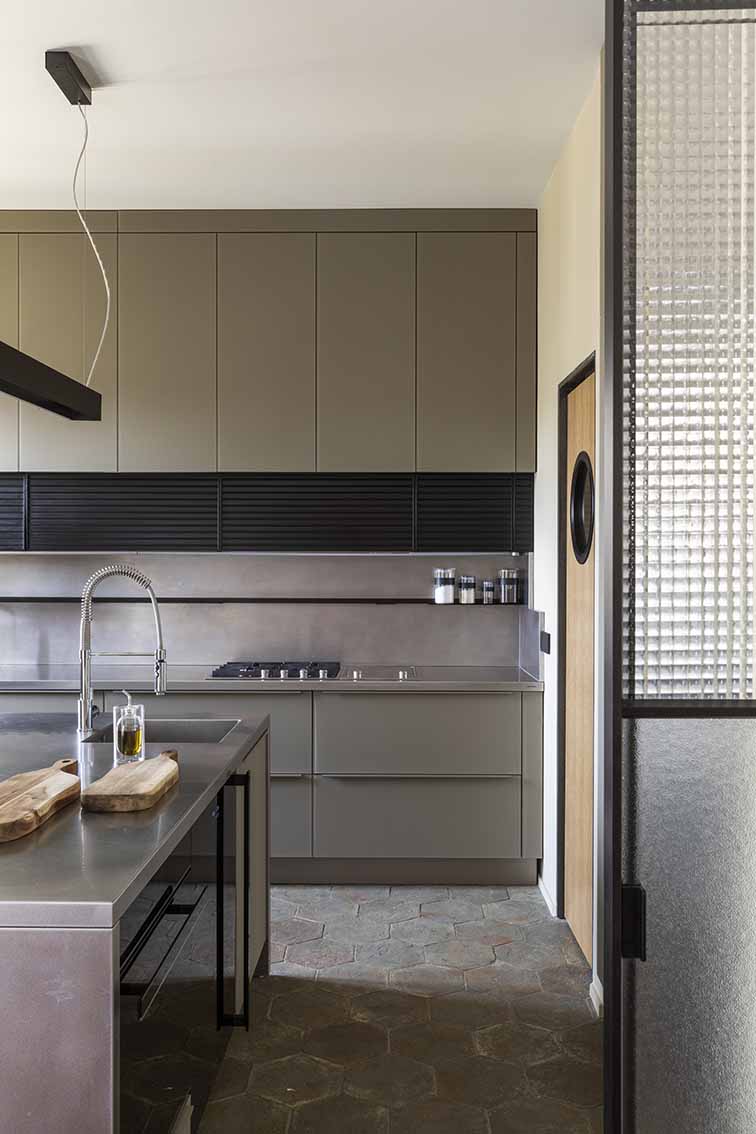 In a city where the Pantheon and Colosseum are as commonplace as the gelato parlours that dot the streets, the interior of this home had to be nothing less than theatrical. And so it is: The fireplace is cloaked in zellige tiles, walnut parquet defines the central floor band, and the living room sports a kingly burgundy that could put royal palaces to shame. But that’s where the imperial-ness ends. Because really, the aesthetic is impossibly eclectic, even riffing on boho-chic, courtesy of easy-breezy furniture like the Dumas sofa by Living Divani, the Gala armchair by Franco Albini for Bonacina, and the Refolo coffee table by Charlotte Perriand for Cassina.

The dining room is more pared-back and cuts a fantastically modish figure (but could you expect any less with black, white and glass?). A Notes table by Living Divani and Superleggera chairs designed by Gio Ponti for Cassina, take centre stage, while Sherazade sliding glass doors designed by Piero Lissoni for Glas Italia dazzle in the background. Not to be outdone, the kitchen gives out a similarly swish vibe, with opal glass wall units and a custom porthole door. The glam of the living area is counterbalanced by the neighbouring study, which is dominated by a terracotta floor and warm furniture and accents such as the Bambi desk and the Juli armchair, respectively designed by Nendo and Werner Aisslinger for Cappellini.

Casa Totem: A Secret Pied-à-terre in Rome by StudioTamat.

Tucked away in the heart of one of the busiest neighbourhoods in Rome sits a secret pied-à-terre by StudioTamat. At just 65 square metres, Casa Totem has been entirely redesigned to welcome travellers who yearn to explore a more contemporary face of Rome… 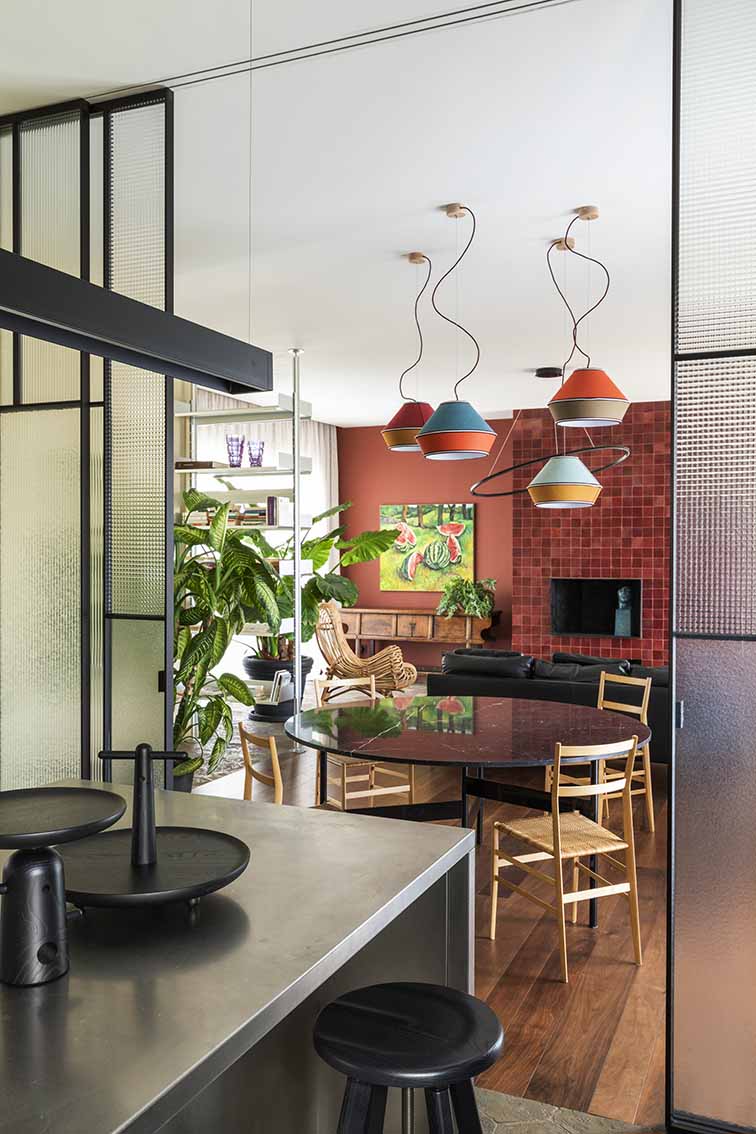 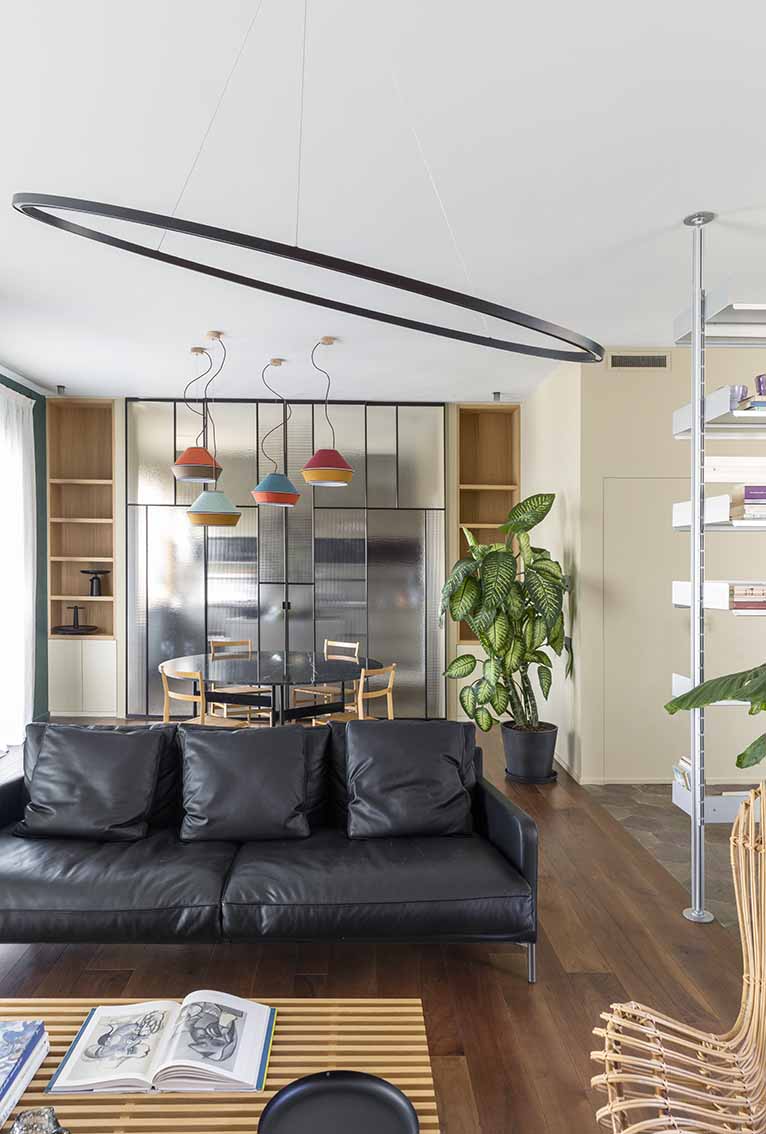 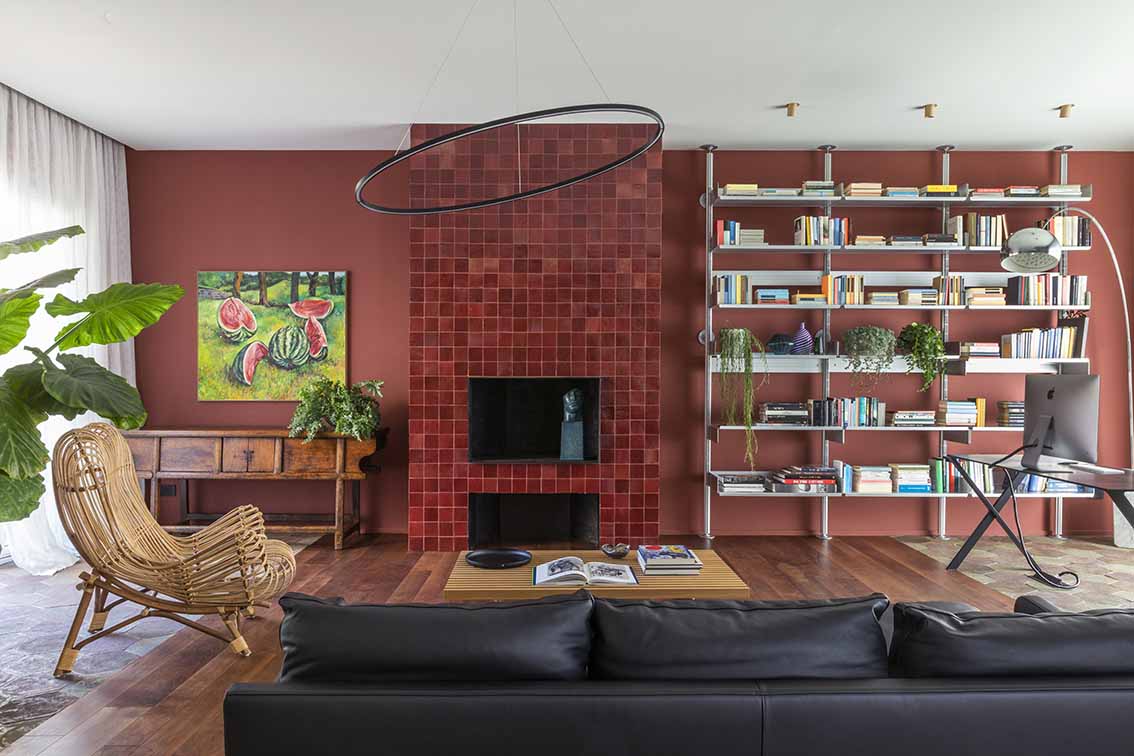 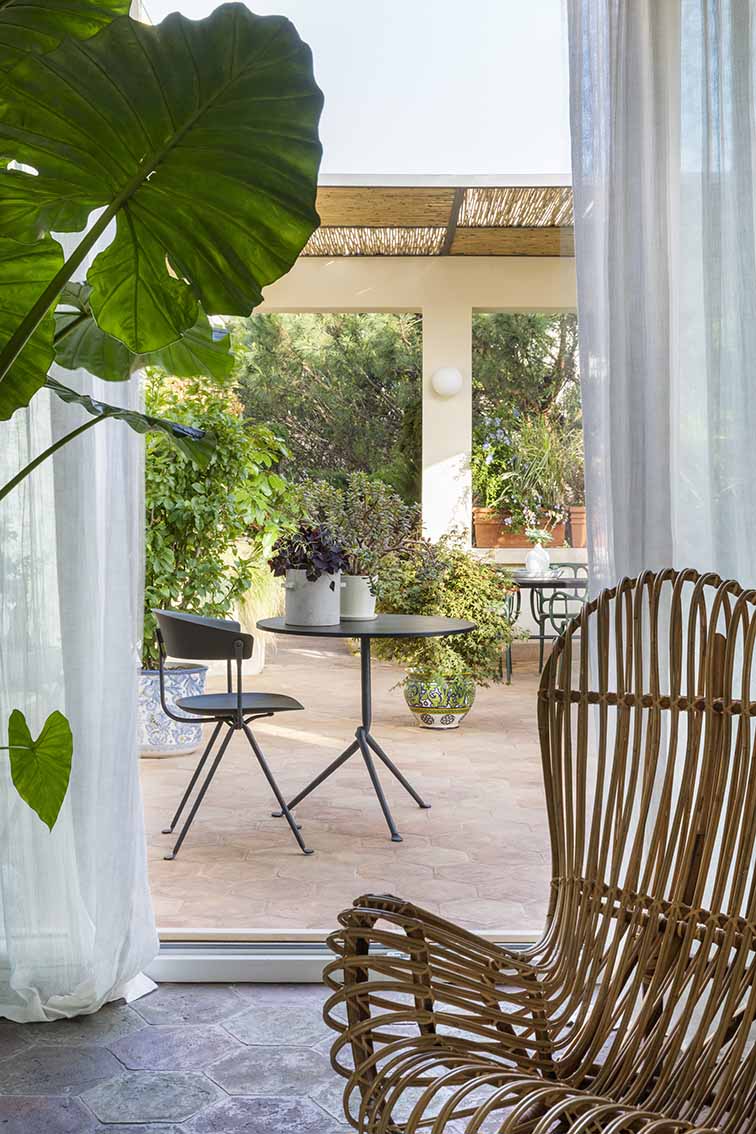 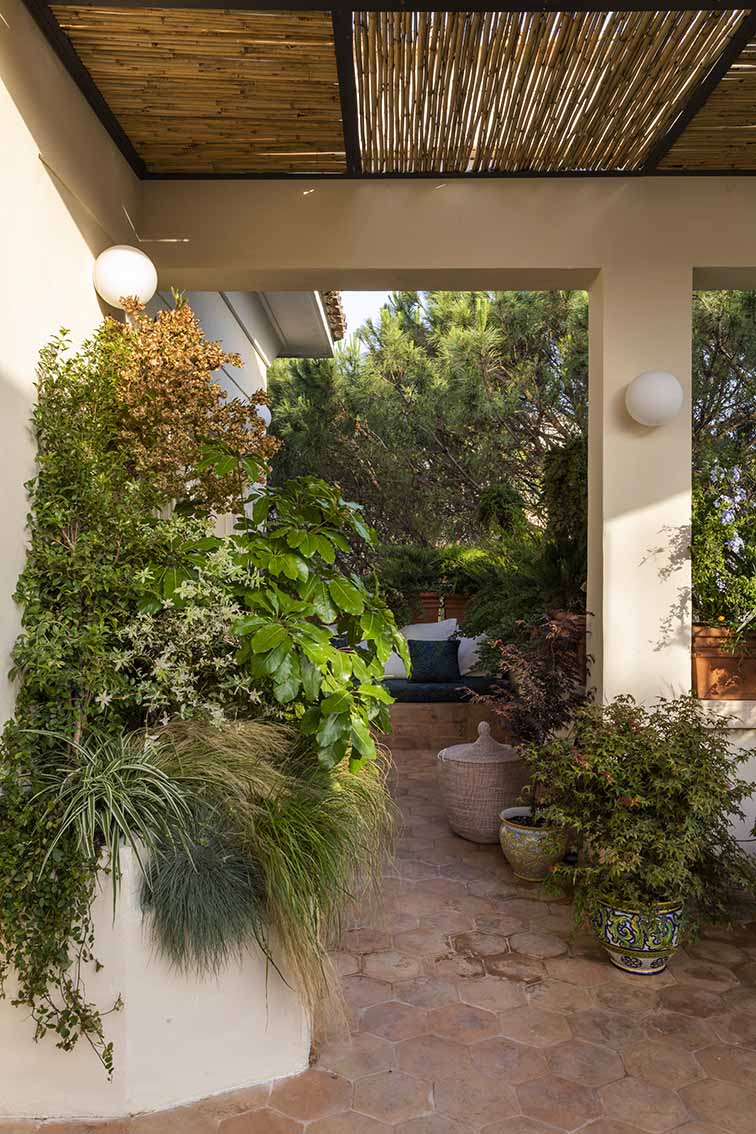 The bedrooms are far removed from the richness of the common areas – the master bedroom, a case in point. Characterised by neutral tones and simple furnishings, it inspires a serene spa-like air. Behind the Chemise bed designed by Piero Lissoni for Living Divani, a wall of off-white majolica, created by Chiara Andreatti for Bottega Nove, sparkles in the sunlight, while Falklands lights designed by Bruno Munari for Artemide flank it on either side. “The full-height oak wardrobe is bespoke and breaks down the hexagonal design of the terracotta floor,” says Tommaso.

The guest bedroom is a vibrant jewel box with indigo walls and delicious plum furnishings. The Monaca desk lamp designed by Gae Aulenti for Guzzini and the L’Opificio patterned bedspread by Bludiprussia add pizzazz to the bold blocks of colour. “We did away with the shutters in a bid to maximise the natural light,” reveals Valentina.

Glimmers of the outdoors are visible throughout the apartment – none more so than in the airy indoor gallery that masquerades as a forest-y greenhouse. “It houses a wide species of plants, and is one of the owner’s greatest passions,” says Matteo. For a home so rich in nature, it was only fair that the terrace got a little extra TLC. And so, the architects roped in garden designer Antonio Basso to create a mini Eden. “Antonio used different species of greens to create an elegant and unusual setting, with a backdrop of strawberry plants, mastic and juniper trees, and condominium pines,” shares Tomasso. Clearly, the apartment packs a punch, both inside and out.

Clocking in at 56sqm this compact, cave-like space has been transformed by Point Supreme Architects into a rich tactile delight. Brightly coloured visual and spatial filters such as sliding partitions…

Historic Apartment in Gdansk by Akurat