Top Posts
Modern Age Flagship in NYC by Ringo Studio
5 Questions with Chef Ashley Rath of Saint...
حقيبتك الفاخرة المثالية – Inside The Closet
Mandeville Canyon by Walker Workshop
What To Do About Your Aging Neck
A Polychromatic Apartment in Rome by STUDIOTAMAT
2023 Lexus RX – Exclusive First Look
‘Zombies 3′ The Lost Song Version Brings New...
The Best Overwater Villas and Bungalows Around the...
صنادل هيرميس أوران – Inside The Closet
Travel


When it comes to religion in Egypt, the majority of us prefer to either think of the country’s prevalent religion—Islam—or, particularly in terms of tourism, of the country’s historic religion. Today, we’ll discuss about the Christian Monuments and Monasteries in Egypt. The majority of us find the beliefs of the god-king Pharaohs, the afterlife, and the idea of numerous deities fascinating, and these topics are frequently the focus of tourism. You may now be aware, though, that Christianity also had a significant historical impact on Egypt and continues to do so.

Early Christianity started to grow in Egypt in the first century AD and developed alongside Egyptian culture and language, eventually developing into the Coptic Orthodox Church, which is still in practice today.

The Red Monastery lies 21 kilometers west of the province of Sohag. It is regarded as one of the most important monasteries founded throughout the early history of Christianity. It is known as the Red Monastery because of the red bricks that make up the majority of its construction. Several pink and black granite columns, as well as white limestone, were used in the building’s construction.

Saint Bishoy founded the monastery in the early fourth century AD, but it was destroyed by two fires, the first during the Roman period and the second because of Berber attacks.

For decades, visitors to Sohag’s famous but decaying Red Monastery church saw only darkened, gloomy traces of what was once one of Byzantine Egypt’s most spectacular painted sanctuaries. At this important place of worship, the bright glories of those antique wall paintings have been restored.

The American Research Center in Egypt, which has sponsored much of the activities at the Coptic Orthodox monastery since 2003, has received funding from the US Agency for International Development. Because the major basilica has been in ruins for much of its 1400-year history, restoration attempts have been hindered by the site’s fascinating and intricate life. Workers had to fix past, poor restorations, and repair and repave floors in such a way that the ancient walls didn’t collapse. From termite and bird damage to leaky roofs and replacement doors adapted to match historical architectural flaws, the worldwide preservation team worked with the Egyptian Ministry of Antiquities to cope with everything from lighting to stonework, from a new altar to re-used columns.

Monks began to settle at the foot of Gebel Al Galala Al Qibliya, where their spiritual head lived, in the 4th century AD. The monastery is now a big complex with numerous churches, a bakery, and a magnificent garden enclosed by high walls. The 120 monks who reside here have dedicated their lives to finding God in the desert’s solitude and isolation, in a life centered entirely on prayer. The monastery evolved over a few decades from a loosely organized community of hermits to a somewhat more communal living in which the monks continued to live anchoritic lives, but in cells grouped together inside a walled courtyard. Despite the changes, the monks continue to follow the traditions and precedents established by St Anthony, St Paul, and their forerunners 16 centuries ago.

The majority of monks that lead tours will take you up onto a section of the monastery’s fortified walls for a short walk to see the enormous basket and wooden winch that were once the only way into the complex in case of invasion. The monastery was attacked by Bedouins in the eighth and ninth centuries, then by enraged Muslims in the eleventh century, and by vicious servants in the fifteenth century, who massacred the monks. The little mud-brick castle into which the monks retired during these raids may be seen from the top of the walls. Visitors are usually not permitted to enter.

Except during Advent and Lent, when it is only open on Friday, Saturday, and Sunday, the monastery is open every day of the year. It is fully closed to visitors during Holy Week.

The Monastery of St Paul the Anchorite, commonly known as the Monastery of the Tigers, is a Coptic Orthodox monastery in Egypt’s the Eastern Desert, near the Red Sea Mountains, that dates back to the 4th century CE. 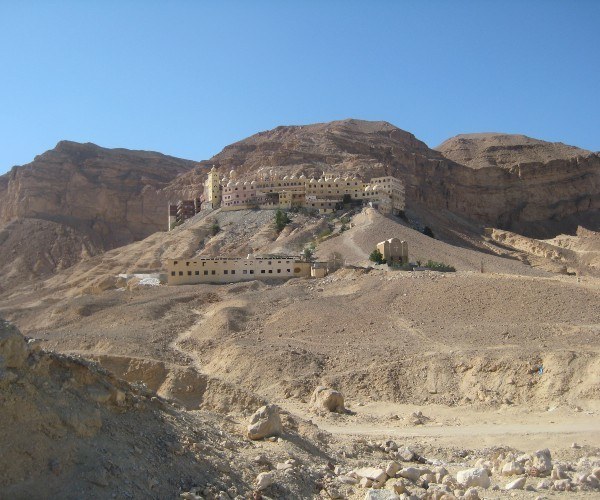 The monastery, which is roughly 155 kilometers south of Cairo, was given the name Monastery of the Tigers because of its remote location amid Egypt’s desert moonscape. It has a rectangular shape that measures 200 meters long by 100 meters wide and spans around five acres of land. The monastery was erected above the cave where St Paul the Anchorite resided for nearly 80 years in the 5th century CE.

Several Bedouin attacks have occurred during the monastery’s history, the worst of which happened in 1484. All of the monks were slaughtered, and the monastery was looted, after which the Bedouins occupied the structure for the next 80 years. The monastery was reconstructed under Pope Gabriel VII of Alexandria’s sponsorship (1526-69 CE), but was attacked and destroyed again near the end of the century. Under the sponsorship of Pope John XVI of Alexandria, the monastery was abandoned for 119 years until being completely renovated and repopulated by monks from St Anthony’s Monastery (1676-1718 CE).

If you are reading this article anywhere other than on A Luxury Travel Blog, then the chances are that this content has been stolen without permission.

Please make a note of the web address above and contact A Luxury Travel Blog to advise them of this issue.

Thank you for your help in combatting content theft.

The Monastery of St Paul is the second ancient Coptic Christian monastery tucked away in Egypt’s long and diverse history, and it is an enormously important location in Egypt’s long and varied history. Visitors can also look at some of the monastery’s manuscripts, including a Coptic language rendition of the “Divine Liturgy.” A journey up the tower and a look of the “Pool of Mary,” where Mary, Moses’ sister, bathed her feet during the Exodus, may be included in a tour of the site.

Why should tourists care about visiting monasteries? In fact, many people visit Egypt particularly to see sacred monuments because it is a part of the holy country. Egyptian monasteries, on the other hand, have become very popular tourist locations, not merely for religious visits. This is due to a variety of factors. To begin with, due to the natural inclination of historic monasteries to stay secluded, many are original structures, as opposed to churches and other buildings of the same age, which have frequently been renovated. Pharaonic monuments, on the other hand, are often shells or, at best, empty buildings stripped of their original furnishings and fixtures. In monasteries, daily, modern life is often accompanied by icons, furnishings, and other living accouterments that date back almost to the time of Christ. Egypt’s monasteries, of course, are the world’s oldest.

Your Guide to Using Setting Powder Like a Pro – 100% PURE

Swimming in the crystal-clear natural pools of the...

Top 10 trending destinations in the world –...

The 9 most romantic destinations across South America...

5 reasons a luxury African safari is a...

How to safari sensitively in India