“Zoom out”: Kealoha Wong ’99 calls on MIT graduates to consider their lives within the enormity of the universe | MIT News 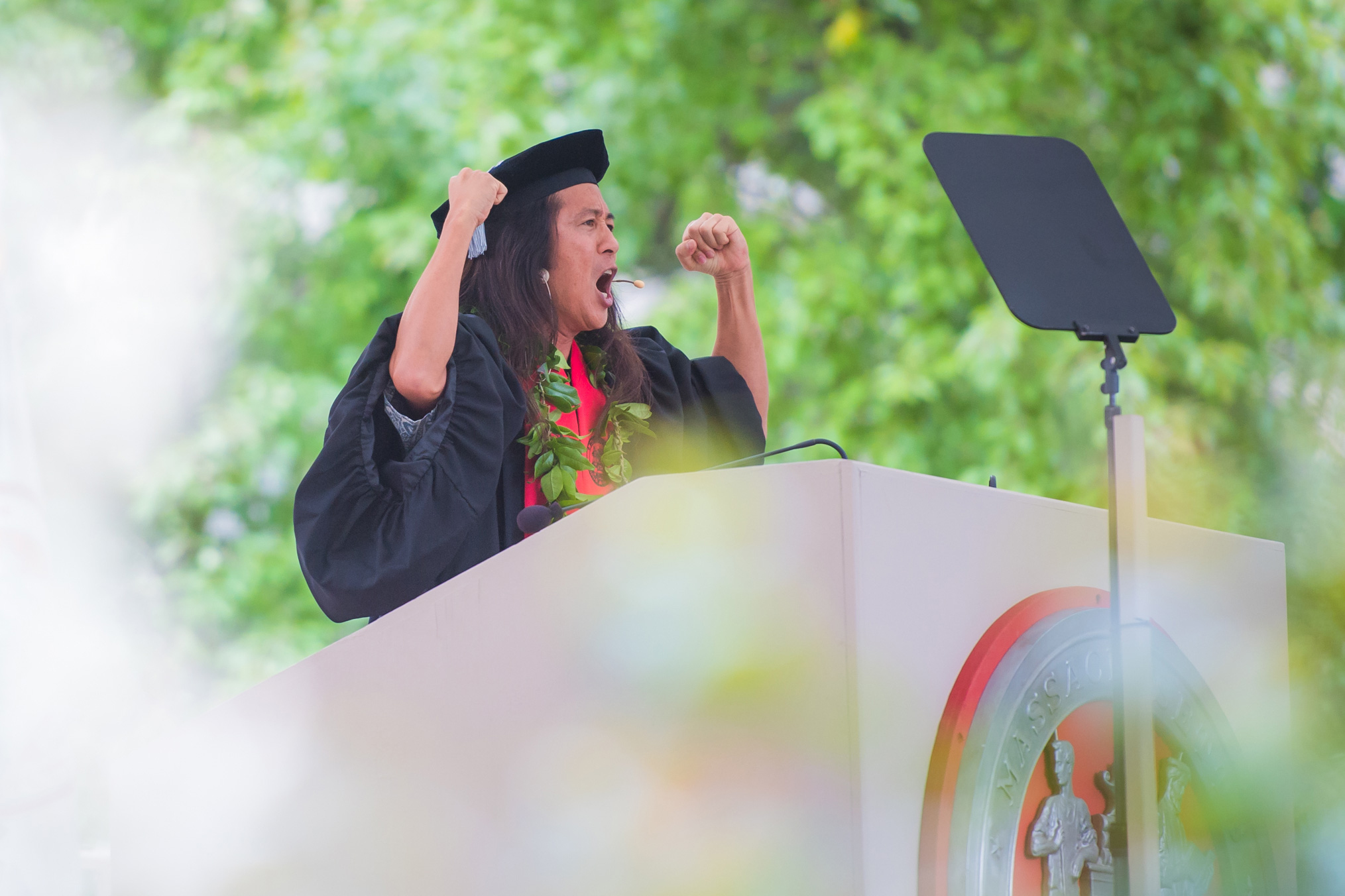 On Saturday, poet Kealoha Wong ’99 delivered the address at a special Commencement ceremony for the classes of 2020 and 2021, asking the graduates to look both outward and inward. He urged them to widen their perspective on life and recognize the enormity of human history and our natural world, but also to look into their hearts and grasp every opportunity to find meaning in their lives.

“We are nobody/ and yet at the same time/ we are everything,” said Kealoha, as he is known professionally, bringing the energy of slam poetry to the podium on Killian Court.

“We are the lump sum of billions of years of evolution / an accumulation of mutations from single-celled organisms to multicellular animals / from tiny sea creatures to fish to amphibians to reptiles to mammals to primates to humans / from all of these ancestors, from the first anatomically modern Homo sapiens that emerged in the lush savannas of east Africa / and every single one of our ancestors who survived and thrived, who migrated around this planet / they all led to each and every single one of us right here / right now / converged in Killian Court at this single point in the space-time continuum to celebrate … your accomplishment.”

In an inspiring address that seemed to incorporate elements of Hawaiian “talk story” and rap, Kealoha advised the graduates, “Learn what brings you and other people joy, and do that, a lot / learn what it takes to make your dreams come true — and do that — yo, do that the most.”

“I wish for you to walk through life knowing that you gave it all that you had to give, to experience everything you ever deemed important / I challenge you to treat your life as the longest, most important, epic problem set you’ve ever been presented with.”

Saturday’s ceremony provided an in-person graduation celebration for the classes of 2020 and 2021, after the Covid-19 pandemic forced their Commencement exercises online. The returning graduates reconnected in small groups and across a sea of caps and gowns, waving and smiling as they spotted each other at an event that was as much an opportunity for reunion as an official culmination of undergraduate and graduate degree programs.

Opening the ceremony, MIT President L. Rafael Reif said he had predicted back in 2020 that, once a few months had passed, few graduates would show interest in returning to an on-campus ceremony.

“I was wonderfully, spectacularly mistaken,” he said, noting that more than 2,500 graduates were in attendance. “That is truly an incredible turnout.”

Reif said he hoped the returning graduates would help themselves to a “fresh scoop” of MIT culture, which he compared to sourdough starter, explaining that many MIT students who had to study remotely during the pandemic chose to gather and study in small groups around the world.

“You scooped up some of the MIT culture, and you used that starter to cultivate your little symbiotic colonies,” Reif said. “MIT culture is precious and powerful, and you can take it anywhere.”

Kealoha, who wore a green-leaf lei with his cap and gown, majored in nuclear science and engineering as undergraduate at MIT. He has appeared on NBC, PBS, NPR, and HBO’s Brave New Voices, and has performed at the White House and internationally, often riffing on science and technology themes. On Saturday, he joked as he began his address that “graduating from here, then chasing a pipe dream to become a professional poet, was probably the most roundabout way to be invited back to speak at MIT. But here we are.”

He urged graduates to step back, to “zoom out” and think of their lives — their mistakes and their expectations — in the broadest of contexts.

“For every year you live / the universe will be around for billions and billions,” he said.

At the same time, he reminded the graduates that, just as their lives and accomplishments were shaped by their ancestors, the graduates’ lives will shape the lives of future generations.

“Our limits will stretch as far as we dare,” Kealoha said, “and between all of us together … if you add up all of our lifetime contributions to society / yo, we’re out here making some serious heat.”

MIT taught the graduates and Kealoha two important lessons, he said: to believe in themselves and to proceed according to the scientific method. He suggested applying that method to all of life.

“Form a hypothesis for your life choices / test your ideas / methodically identify your constants and change the variables in your life / circle back and tweak your hypotheses to incorporate your findings,” he said.

In concluding, Kealoha counseled the graduates to live with energy and intention.

“I want you to think about all the things you wish you could do / and tonight, I want you to do one of them / and tomorrow, another / our lives are temporary art pieces … / we are works in progress …  / so I say paint your butt off … / use fluorescent yellows and reds in the places where there aren’t any colors / dance for the moment / sculpt your life out of soil and make the universe smile / be the expressive process that is humanity / today I want you to think about your life / and tomorrow, y’all, go on out there and live it.”